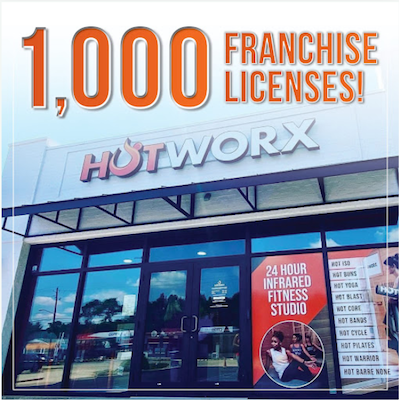 It began with a great workout…a workout like no other…Athletic Yoga in an Infrared Sauna! In the beginning we described it as “Beyond Hot Yoga”. It will always be about great workouts for our clients so that they can experience spectacular results!

We opened the first HOTWORX location on February 13, 2017, just four and a half years ago. This past Friday, on the 10th of September, our Franchise Recruitment Department closed on the 1000th location license. The brand is poised for explosive growth now with over 210 locations open and close to 300 units in the active opening pipeline, and another 490 in the early stages of development. This momentum will enable HOTWORX to achieve its goal of 500 locations open in its fifth year which will happen sometime in 2022.

This is by design. Before we opened the first location we set out to launch the new brand with a goal of 500 open locations in our fifth year. Countless hours of thought and planning went into the franchise launch. The corporate team galvanized around the strategy and set out on a rapid development course with a mission to deliver fast, convenient, and effective workouts to our studio members. The mission to provide MORE WORKOUT in LESS TIME sounds simple, but the actual process of creating a new franchise is very complex and requires a team of executives who are devoted to the cause.

I am amazed sometimes when I listen to the whining from former associates to businesses who either quit or were fired or otherwise released from their duties who fail to understand what it really takes to grow a franchise to a certain level of momentum. If you want loyalty from the customer, you must give loyalty to them first!

Health clubs, and professional trainers, sometimes fail to place the client at the top of the pyramid. It is the member of the studio who should be exalted! Without them the instructor would have no-one to teach. It is the customer who creates the purpose for the fitness instructor and not the other way around. The instructor is there to illuminate the path, not to shine the light on themselves!

Even the greatest product in the world would never gain traction without a core team that is loyal to the customer mission above themselves. We look for virtual instructors who are more concerned with their clients, and HOTWORX customers, than they are about promoting themselves. For HOTWORX, It will always remain 100% about the great workouts for our members.

It is the franchise organization of long term players and not short term takers that makes the difference in building powerful business momentum. A core team of franchise executives who have banded together for a long term common cause will always outshine and outperform hired guns who are in it for themselves.

When a solid team is given the right product at the right moment in time, then business magic happens. This is the case for HOTWORX. The core franchise organization was in place already and then they were presented with a stellar product idea that they rallied around, and those who made the cut with the organization have given 100% to get the brand to this most remarkable milestone of 1000 licenses granted.

This next year will be one of FOCUS.

In fact the theme for our 2022 franchise convention will be FOCUS. A dedicated team, combined with incredible levels of focus on the customer is the secret sauce. Those who focus on themselves over the customer will never make the cut!

The FOCUS has to remain like a laser on the development of great training sessions in support of great franchise locations that deliver MORE WORKOUT in LESS TIME to the customer base. If HOTWORX can continue to do this, then the recruitment of the next 1000 locations may come even faster than the first!

As focused fitness professionals, it’s the mentality of MOMENTUM and RESULTS that achieves great things for CLIENTS FIRST, and then for the business!