A Fitness Ascent Based on Desire 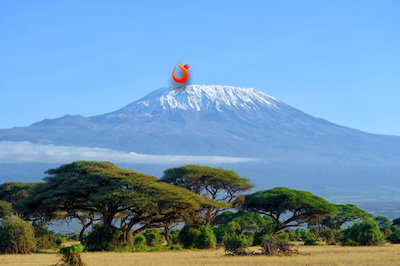 "The starting point of all achievement is desire. Keep this constantly in mind. Weak desires bring weak results, just as a small fire makes a small amount of heat." -Napoleon Hill

It’s been almost two months since our HOTWORX team climbed to the summit of Kilimanjaro. That magnificent mountain, “Kili”, as it is referred to by the locals, is the world’s tallest free standing mountain. I can tell you that when viewed in person, it is a giant. It makes all of the mountains that I have seen when I snow ski look small. It is surreal when looked upon from a few kilometers away.

I remember when the four of us went to the top floor of the hotel in Moshi to take our first glimpse in daylight of what we were about to scale. It was emotional to view it for the first time. It was breathtaking! Photos did not do it justice, and there it was, that legendary mountain created from a raging volcano around a million years ago. It was now in our plain view with all of its magnificence. In that awe inspiring moment though, reality set in for the HOTWORX Kilimanjaro Team. Our 5 day cardio and HIIT workout was about to begin, and our infrared sauna 3D Training would soon prove vital to the success of the climb.

If you are considering a major hike, or mountain to climb, then I would highly recommend the HOT CYCLE at HOTWORX with an oxygen restrictive mask. You will need to ease into the mask for only a few minutes at first, then build up to using the mask during the entire HIIT workout. In addition to breath training for low oxygen environments, the cycling resistance for lower body is perfect movement for hike training and of course it is superb for cardio conditioning. Know this, climbing a mountain requires extreme levels of cardio performance. Check with your doctor before attempting this type of training.

There are an estimated 30,000 people who attempt to climb Kili each year and there are summit success rates based on the length of time for the climb and based on the route taken to the top. The faster the route, the harder the climb, and the lower the probability of summiting. The trek we chose was the shortest route with the lowest summit success rate at just 27%. I will say that we never even considered the possibility of not summiting. It was simply not an option for us for two reasons. First, because we had incredible desire to conquer that route and get to the top, and second we wanted to hoist a Sacred Mountain Retreat Center flag at the summit to raise awareness to the center and what they do for our wounded veterans and first responders.

I am happy to announce that our marketing department has just released a short video documenting the trek. Take a few minutes to watch it below:

Desire is a powerful tool for taking action. The power of desire lies in its aim, which is to alter reality. A strong desire to accomplish something will force you to do the things that are necessary to achieve that new reality. If you want to climb a mountain, it will be the desire to get to the top that leads you train in an infrared sauna, for example. Desire propels you towards the new world that you want. Desire creates a force in fitness for those who want to stay in shape. Desire creates a force in athletics for those who want to win.

Find your highest level of desire and you will take the action that is necessary in proportion to your goal.
👊🔥

Quick Note:
Our “Hiking for Heroes” deadline for donations to Sacred Mountain Retreat Center is April 29 at noon. Corporate will match the amount that is raised! CLICK HERE TO CONTRIBUTE