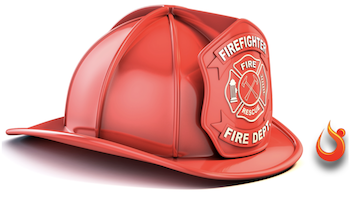 A couple of weeks ago I had the honor of attending a sauna donation ceremony for the Waxahachie, TX Fire Department. The entire HOTWORX franchise organization would like to commend Chief Ricky Boyd and all of the firefighters there for such an outstanding job. We also want to recognize the franchise owners of the Waxahachie HOTWORX Studio, Janie and Pat Sullivan and their staff for nominating the fire department and for raising $3,000 in cash as a donation to the Waxahachie FD as well!

HOTWORX corporate has made a commitment to donate and install the patented HOTWORX workout sauna in select fire stations that have been nominated by franchise owners. These fire station infrared saunas provide a means for firefighters to detox their bodies after exposure to untold levels of toxic substances as they fight fires to protect communities throughout the world.

Also, last week I had the pleasure of meeting one of our newest franchise owners, Daniel and Robin LaBerge. They purchased a license to open a HOTWORX studio franchise in Manchester, MA, a suburb of Boston. Daniel is a firefighter with many years of experience. As we began to talk in the Zoom meeting, Daniel told me the story of fighting a fire once and then three days after battling that fire, when he was playing a game of hockey he could smell the smoke and toxins exiting his body. Detox through sweat is real my friends, and especially for firefighters!

I have researched the sweat and detox connection thoroughly and have written many blog articles on the topic. Without a doubt, sweat provides a means to assist internal organs in the removal of toxic substances from the body. It is for this reason that we decided to begin to provide infrared workout saunas for firefighters. Unfortunately, firefighters have a shortened lifespan compared to the rest of the population due to cancer caused from the fires that they fight. Elevated exposures to poisons released from the fires are absorbed into their skin. We owe a debt of gratitude to these fine men and women who sacrifice so much to protect our communities.

Infrared induced sweating is 7X more effective for detox as compared to a traditionally heated sauna sweat. We hope that our HOTWORX infrared saunas can begin to play a small part in helping fire stations with their detox programs. In the words of Chief Perry Bynum and the firefighters of the Haltom City, TX Fire Station #1 where we installed our first fire department sauna, let’s “Kick the ash out of cancer”.

We look forward to donating and installing as many saunas as we can for fire stations throughout the world to help firefighters “Rock the Detox!”