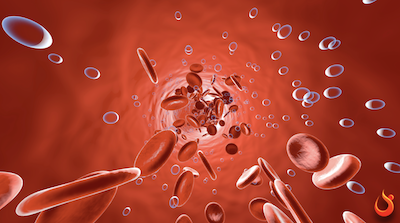 It is well known that infrared sauna sessions can increase blood flow and expedite the absorption of oxygen into the bloodstream. This is due to the nitric oxide effect. It is also well known that better circulation is generally associated with better health. Of course, we know that better circulation equates with a more efficient cardiovascular system and metabolism for fat oxidation.

How you breathe during an infrared sauna session is important for fat burning as well. Breathing through the nose can generate even more nitric oxide effect which is one reason why yoga and other forms of isometrics that encourage proper breathing are so effective for cardio conditioning. Think about the potential for increased circulation from exercise combined with proper breathing performed inside of an infrared sauna!

Here’s another way to look at it…

It’s possible that the combination of proper breathing through the nose combined with infrared exposure can stimulate the brown fat cells to burn more fat for energy.

Breathing through the nose creates nitric oxide, a signaling molecule for vasodilation. Modern fitness programming should take into account the importance of this nitric oxide effect. And, instructors should explain this scientific reason for breathing through the nose more frequently than the mouth! They mostly focus on the calming effect of breathing without explaining why that occurs.

HOTWORX, the originator of the 24 hour infrared fitness studio, has created multiple forms of infrared isometrics with a focus on proper breathing including shortened versions of yoga, pilates, barre and other isometric workouts performed inside of the HOTWORX patented infrared sauna. The combo of exercise with infrared energy and heat, known as 3D Training, can greatly improve circulation. Research suggests that increased circulation can help to burn more fat.

Being overweight is caused when too much white fat is present in the body. There are two types of fat, white and brown. Brown fat has blood vessels and burns energy, and has recently been discovered to exist in humans. The object of one study with mice was to determine whether the brown fat can use up white fat when stimulated by increased blood circulation.

“Increasing the blood flow in brown fat causes it to burn more calories in mice and may help treat obesity, a new study in the Journal of Applied Physiology reports.” (1)

The study was reported by sciencedaily.com and the heading of the report reads: Turning on Blood Flow Turns on Fat-burning Brown Fat in Mice. In the study researchers used a drug to induce more blood flow in the brown fat of normal-weight mice. The result of this was an increase in the consumption of glucose indicating higher activity by the brown fat. The theory is that consistent stimulation of brown fat can reduce the amount of white fat.

This is promising new science in support of what we believe is happening every day with modern fitness techniques such as hot exercise. Training inside of an infrared sauna, when done with the proper zero impact form of isometrics or HIIT, can be a super effective fat burning tool because of the increased blood flow and oxidation. There are thousands of positive reviews online to support this from an anecdotal standpoint.

In fitness, it’s all about the results. Maybe it is time to give 3D Training a try!
👊🔥