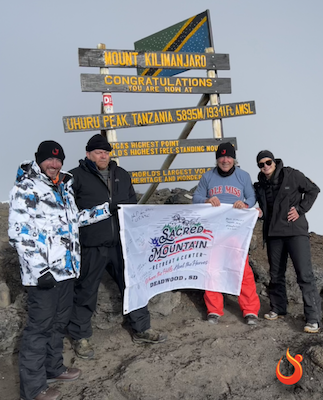 We were to get to the top of Kilimanjaro with the fastest, most difficult route to raise money and awareness of a place in the Black Hills of South Dakota known as Sacred Mountain Retreat Center @sacredmtn. They provide an incredible program for wounded veterans and first responders. Please give them a look and donate to their cause for our nation’s heroes if you can! Here’s the link: https://www.gofundme.com/f/mt-kilimanjaro-climb-for-wounded-warriors

We accomplished the climb up and down the legendary Mount Kilimanjaro in 5 days ascending through four distinct climate zones beginning with the rain forest jungle, then on to the Heather-Moorland Zone leading to the Highland Alpine Desert, then on to the Glacial Arctic Summit. Take a look at the success rate chart for Kilimanjaro below and you will see that the 5 day route has a low 27% success rate:

The most important reason for success on this mountain is a high level of cardio conditioning. The climb is a constant, hours on end, high intensity interval training session with super high levels of energy expenditure and lessening of available oxygen levels for breathing as you go up. Therefore, superb cardio conditioning is a must! I can say that our HOTWORX 3D Training with altitude masks proved to be a major reason for our excellent cardio conditioning on Kilimanjaro.

Our final ascent began at midnight on the third night. We all knew that the weather conditions would be less than favorable and that all of our HOTWORX training was about to be put to the ultimate test. Proper conditioning is important for any sport, but for what we were about to do it was going to be make or break.

Climbing “Kili”, as the locals call it, requires a healthy heart that has been conditioned for extreme energy expenditure and prolonged hard pumping of blood to supply oxygen throughout the body. Cardio training is where your focus needs to be to prep for a climb like this.

When we finished our climb on the 5th day, back at the park entrance, we met two girls from the Czech Republic and one of them said that she had been weight training to prepare for the climb. My bet is that she did not make it to the summit. Weight training alone will not prepare you for this climb. This is a cardio challenge!

Prior to arriving in Tanzania, myself and my training partner Jeremy used oxygen restrictive masks while we would do cardio inside of the HOTWORX saunas. We relied on Hot Cycle and Hot Thunder, and it proved to be a game changer on the mountain. Two weeks prior to our trip to Africa I actually used the oxygen restrictive mask while snow skiing to get a feel for even lower oxygen at higher altitudes.

Now here we were. The guides woke us up out of our sleeping bags around 11:30pm on the third night. None of us slept well for the three days leading up to this point. I remember tossing and turning in my sleeping bag with earplugs in and thinking about anything and everything hardly ever experiencing true sleep leading up to the summit night. None of us had good sleep prior to summiting.

Adrenaline took over. Now it was time to focus like we had never focused before. We all expected this to be hard, but we didn’t know what we didn’t know…

The HOTWORX team was stepping out into the dark to climb a mountain where we had never been. We had butterflies, but we were ready!

Seven hours and fifty-one minutes later, through sleet, snow, below freezing temps and a 4000 foot vertical climb over boulders, we did indeed achieve our objective.

Probably the most treacherous thing we experienced on our way to the top, though, was a trek through a thin path in the glacial ice at 19,000 feet, in the dark with a straight drop into the crater just to the right of us. This was somewhere between Gilman’s Point and the summit, known as Uhuru, the Swahili word for “freedom”.

The summit is referred to as “Freedom Point” by the locals in honor of their independence gained from Great Britain in 1961. This seems appropriate for our climb, Hiking for Heroes!

We made the summit at 7:45 a.m. It was very emotional at the top as all four of us huddled together in gratitude for our successful climb. We had accomplished what we came to do. All the way from New Orleans, LA, four people bound together as a team to climb the legendary Mt. Kilimanjaro, the tallest free-standing mountain in the world by taking the shortest and most difficult route. What a feeling it was to be at the top of Africa!

My sincerest congratulations go out to my team members. John Carlton, we call him “Jay”, a former Marine and franchise owner of HOTWORX in Raleigh, NC who is a diabetic and he managed this through a monitor that was attached to his body throughout the entire climb. This dude is tough as nails and I am proud to have climbed Kili with him. Victoria Price is an Army Sergeant, an executive for HOTWORX corporate and a franchise owner of the HOTWORX location in Gretna, LA. She scaled the mountain like a champ and took in video footage for the company being the professional that she always is and I could not imagine her not being a part of this team. Jeremy Harwell, an Ole Miss grad with a degree in exercise science and the very first HOTWORX manager who helped put the brand on the map. Jeremy is my training partner. Brother we knew we would do this! I love all of you guys and can’t say enough about what it has meant to have climbed this mountain with you! We did it.

To put this into perspective, about 30,000 people attempt to climb Kili each year. Most attempt the longer routes with the higher probability for success. If we assume that one fifth of the 30,000 attempt the hardest 5 day route (and I doubt it is that many), then that would be about 6000 people. Of that number, based on the 27% success rate, then only 1620 people in the world successfully scale the toughest Kilimanjaro route per year. Being in that number is why the emotions ran so high when we reached Freedom Point!

You can see by the photo below that I burned 5,460 calories during the time it took to get to the top on the final climb, which is an astonishing amount of calories for one workout session. By far it was the most that I have ever burned in one session, and we still had to climb down! Going down is always challenging but a LOT easier on the cardio, for sure.

When making workout decisions, you need to ask yourself a question. What is the appropriate challenge for my level of fitness? It goes without saying that you should make sure that you have no heart issues before you begin any fitness program, but especially if you train for something like climbing a mountain. Talk to your medical professional about BP checks, EKG, or even a DNA test prior to creating a training routine for general fitness and for prep training to attempt anything like climbing a mountain or running an obstacle race, or even for something as easy as jogging.

When I made the decision to take on the 5 day Marangu route up Kilimanjaro, it was based on knowledge I obtained online, my training methods, and a gut feeling that it was appropriate to my level of fitness and that of those who joined me on the trek. Turns out it was the right route for us as a fitness team. We all four agreed that it was the most difficult thing that we had ever done, but because we conditioned our bodies using the HOTWORX training method, we were ready for the challenge of KILIMANJARO CARDIO!
👊🔥