More Than a Quarter Century of Spa and Fitness Franchising 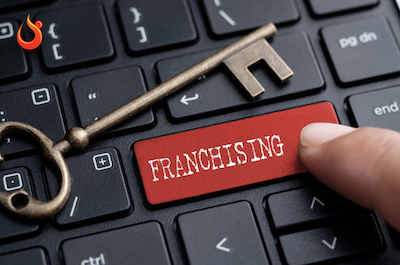 I have to say a big HAPPY BIRTHDAY to our franchise organization with this article. Last Friday, April 1st, the company turned 26 years old! I thought it appropriate, and upon suggestion from some of our team members, this blog post is dedicated to our two franchises, the legacy Planet Beach, and to our newest concept, HOTWORX. From our meager beginnings in 1996, and through many obstacles, triumphs, mistakes and lessons learned, we were able to grow the franchise organization into one really cool spa brand and one great fitness brand! Here’s a look back…

It was April Fool’s Day 1996. On that day a franchising company was born in New Orleans. What would eventually spawn HOTWORX Franchising began with one lone tanning salon that had just changed its name from Electric Beach to Planet Beach with a unique new logo.

Back then we had zero experience as a franchisor, but we had a dream and a strong work ethic that our organization carries forward to this day. The experience my business partner Nancy and I did have, though, was a few years of health club membership sales experience, and it gave us a profound advantage as we pressed forward to bring our knowledge in the health club business to bear as we introduced it into a very different industry. Poised with our new brand name and logo, we launched an effort back then to expand operations through a method known as franchising.

As a new franchisor we launched head first into franchising. I had just exited as an owner of three Gold’s Gym locations as a licensee. Nancy had moved home to New Orleans from California where she had managed a Gold’s Gym for the owner and former heavyweight boxing world champion, Ken Norton. She became the GM of my Gold’s location in Gretna prior to becoming my partner in franchising. So, even though we had no experience as a franchisor, what we did have was experience with operations of licensed health clubs.

Mistakes were made along with the victories that we celebrated, and we came to understand that those challenges were really nothing more than lessons learned and opportunities to innovate. We managed through major external challenges such as Hurricane Katrina, the BP Oil Spill and an industry collapse. At times we could have thrown in the towel, and at one point even our lawyers advised us to file Chapter 11, but we just kept fighting. We doubled down on our resolve. You have to keep going! You may have to pivot, but you can never just stop. Loss of momentum can crush the entrepreneurial spirit. You have to invent your way out of tough situations.

Very soon we will be launching something spectacular for our spa brand to finally shed the baggage of the “tanning salon” past and catapult the original franchise into a future of spectacular business expansion.

All the while, the fitness brand, HOTWORX, continues into hyper growth by design!

Sometimes, in fitness, in life, in business, we need to take a look back, though, to reflect on where we came from. A business birthday is the perfect moment for that. Here are some highlights since the beginning of our franchise organization:

The company has come a long way since 1996 for sure. At times the lessons were painful and we had to “fail forward” as I like to say, but giving up has never been an option. I tell folks that HOTWORX might be a young, emerging franchise, but that the company is managed by a team of seasoned franchise veterans.

I am very happy to report that HOTWORX is on track to achieve the goal of 500 locations open in our 5th year of age as a franchise. Take a look at the growth chart below representing the open location expansion history and projection for 2022:

So, what have we learned through the years in franchising? First, gross revenues are not important! Yes, you heard that right. For entrepreneurs, the most important number is the amount that you can keep. Profit creates way more opportunity. BY FAR, the most important goal of a franchisor should be the profitability of the franchise locations. True profit, though, can only be made through a laser focus on the service and the experience of the members who join seeking results! The customers are always at the top of the pyramid with the franchisor and the franchisee at the base in support of those at the top! There is no other way.

We believe that franchising is a team sport and I will devote a future blog post to that topic, and maybe even a book one day. Another thing that is super important is the organizational effort to give back to our communities, and we do that through initiatives to raise money for veterans and first responders who have been wounded and are in need.

We also give back through our fire station program to donate HOTWORX saunas for detox in support of firefighters.

There is another area where we are placing emphasis that is supremely important. Transformation to clean energy is vital to the health of the planet and very important for all businesses.  Our franchise is committed to an offset program to achieve carbon neutrality throughout the entire franchise company by 2030. We are developing a very unique, innovative and financially beneficial idea to accomplish this objective for our franchise locations. Stay tuned…

Here’s to many, many more revolutions around the sun for this franchise organization!!!
👊🔥