The Most Unique Rower on the Planet is Now Patented 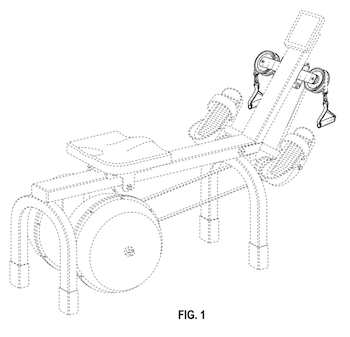 We opened our franchise convention this year in San Antonio with 800 in the audience and another 300 watching online. Right after the national anthem which was sung by our brand ambassador, Rachel Bradshaw, we presented a big reveal with fog, rock music and a curtain drop to unveil Jeremy, Victoria and Virtual Instructor Ashlee B killing it to the beat under the spotlights with the most unique fitness rowing machine on the planet!

It has been a journey to get to this point with a rowing machine that would fit in the HOTWORX infrared fitness saunas, and one that would be different and more effective for hot exercise. I researched the world over to find a rower that would work for the franchise, but never could find the perfect one. I knew that it had to be a water rower because customers want to feel like they are actually rowing like in a boat on the water. The problem was that no model would fit properly in the sauna and they all had the same single water tank and restrictive single cable rowing handle that required both hands to do the same exact motion. To me that was not really rowing. Fitness rowing needed to truly emulate rowing a boat. I imagined also that we could design a new rower that would solve both of those problems and that is exactly what we set out to do almost 2 years ago.

By adding dual water turbo tanks, changing the traditional belt system to cables and adding swivel handles as hand grips with two swivel top and bottom pulleys in the front, we were able to change the game for workout rowing. Below you will see the first design that was submitted to the U. S. Patent and Trademark Office drawn to fit perfectly inside the sauna:

The design and drawing was the easy part. Finding the right manufacturing partner, not so easy. Getting to a working prototype, not so easy. The manufacturing process can be very messy and nail biting even. I’m a person that believes impatience is a virtue because sometimes we veil procrastination as patience. I must admit, though, getting a new machine invention to market definitely does take some patience, but with hard and fast deadlines!

After many prototypes and many engineering iterations later, we finally got to a working prototype. Here’s a funny story that happened when we received the second round of prototypes from yet another manufacturing partner. One of our awesome franchise operators from Houston, Michael Abdouch and his wife Darlene came to New Orleans to meet up with a few of us for dinner, but the day they came into town, I also wanted Michael to give the prototype a try. Michael is a fitness fanatic and I would say a rower aficionado. He hopped on one of the prototypes, and being the power rower that he is, he broke the cable pulley system within the first 30 seconds! It was a bitter sweet moment because I felt dejected that it broke, but it let me know exactly what we needed to do to fix the problem permanently! Failure is merely another lesson as long as you never give up!!

That was just one of the many manufacturing hurdles. The executive in charge of the “Thunder Row” development, Victoria Price, tackled each of the challenges head on to deliver finished and fully functional units on schedule and ready for the big reveal at the convention.

I’m very pleased to announce that the new rower invention is now patented! It took a year and half to obtain the patent. I consider that fast compared to the four years it took to obtain the sauna patent.

Thursday I received an email from our IP attorney informing me that the patent for the Thunder Rower was allowed by the USPTO! On the same day we also received another patent for a fitness product that we will reveal at a later date…stay tuned for that one. That makes three patents for fitness devices that are now owned by the company. Innovation is key!

Look for the newly patented “Thunder Row” machines and the innovative new workout associated with them, HOT THUNDER coming soon to a HOTWORX 24 Hour Infrared Fitness Studio in your area 👊🔥