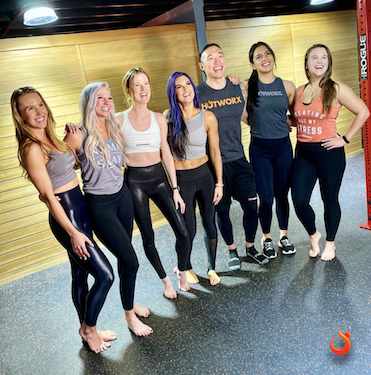 In just its 4th year now the unique HOTWORX Virtual Instructor Competition is in full swing as we approach the upcoming franchise convention in San Antonio for July 19-21. This year I am pleased to announce that we are filming a web series to document the progress of the 2021 competition season. The series will consist of 5 “webisodes” including the following:

This first episode will showcase infrared fitness and explain why the company chose to create an international competition to recruit a team of fitness instructor talent each year. It will feature interviews with the CEO and other corporate team members who are responsible for bringing the competition to life, as well as interviews with current virtual instructors.‍

Episode 2: Narrowing Down the Best of the Best

‍The second episode will give an overview of what the competition is, and what the company is looking for. The marketing team will explain the process of recruiting for applicants and will feature application evaluations and the online voting round. The corporate team will select top applicants that will move to the next round where online voting will begin. The top 15 and the fan favorite will be announced. ‍

Episode 3: Everybody is Earning the Burn‍

This episode plays out at the franchise convention in San Antonio at the La Cantera Resort. Here you will get to know the top 15 competitors and watch interviews with top franchise owners as well. Episode 3 will feature the judging panel when they evaluate candidates during the Mental Readiness Interview Round and the Technical Form & Workout Cueing Round.‍

July 20th: Virtual Outdoor Workout where each competitor will lead an isometric/yoga/pilates style workout segment for all attendees of the convention. Competitors will talk about how the competition is going along with interviews with franchise owners, judges and the CEO during this episode.‍

Episode 5: And the Winner is…‍

The Final day: interviews with the CEO, judges, franchise owners, competitors continue as excitement builds towards the final round. During the final round on the main stage competitors will experience the Earn the Burn Posture Challenge while being asked interview questions on stage. Imagine holding a plank for 5 minutes with perfect form while being asked a detailed interview question! This episode will feature the potential virtual instructors while they are put to the final test leading up to the announcement of the 7 winners including 5 virtual instructors, 2 virtual personal trainers and the award for the overall MVP of the competition.

What HOTWORX is looking for is seven team players to serve its members as virtual instructors this year, just like every other year since the inception of the competition. This is an athletic endeavor and the company requires a teamwork mindset, especially from the virtual instructors who are selected!

In the last pages of the book I published last December, HOT EXERCISE, you will find an essay entitled A Franchise is a Team. In that essay I make the case for how important it is to view a franchise system as a team in the same way that Patton viewed his army as a team. In the HOTWORX franchise it is a must to find virtual instructors who value teamwork and the right attitude for team success. Here is an excerpt from those final pages in the book:

When you view franchising as a team the entire organization makes perfect sense. The way I look at it is with the franchisor as the coaching staff and each franchise location as a player on the team. For HOTWORX and our sister brand Planet Beach it works very well as viewed in that paradigm. A paradigm is not just how you look at something, though, it is also how you think about something. With the franchising model, it must be viewed as a team but always thought of as a team too. Franchising flourishes when understood truly as a team with coaches and players striving to outperform each other and to surpass competitors from other brands.

The application round closes out on May 31, so if you know of any fitness instructors who might have what it takes, invite them to apply to compete to become a HOTWORX Virtual Instructor for the 2021-2022 workout video filming year.

Look for the web series to air this Fall!