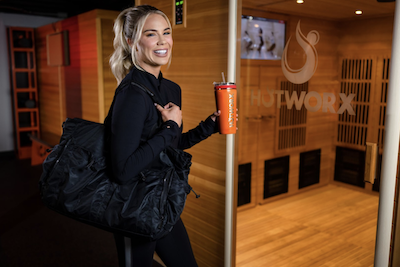 HOTWORX partners with Rachel Bradshaw, an award-winning singer, songwriter, and co-star of E! Network’s The Bradshaw Bunch, to be the 2021 Brand Ambassador. HOTWORX CEO, Stephen P. Smith says, “Rachel is a perfect ambassador for our brand because she not only loves HOTWORX but represents our target demographic.”

Growing up in West Lake, Texas, Rachel was taught the value of competition and hard work at a young age from her father, NFL Legend turned TV Host, Terry Bradshaw. After graduating from Nashville’s Belmont University, Rachel was quickly signed as a solo Country Artist and songwriter. Gaining national attention equally as a songwriter and solo Artist, Rachel co-wrote the #1 and RIAA Certified Gold Country single “What Do You Want” with Jerrod Niemann, and played on The Tonight Show with Jay Leno.

Born with severe scoliosis, or an abnormal curvature of the spine, Bradshaw has struggled to find a compatible fitness routine. “I had an upper and a lower extremity and my body was contorted in a way so I couldn't run anymore,” she explains.  After an intense spinal fusion surgery to remedy her back issues, Rachel was left with two metal rods and 40 screws in her spine. When searching for a fitting fitness regimen, Bradshaw discovered HOTWORX from a friend who is a member at the Nashville, TN (Midtown) HOTWORX studio. She says after her first session of Hot Yoga, “It was an instant addiction because of the infrared energy. I left and my skin felt so good and I felt completely rejuvenated as if I’ve gone on a detox program.” Within three months of joining HOTWORX, Rachel was able to touch her toes again, a feat that was previously unbearable. “It was the coolest experience because this was the first workout I could really do with my back issues,” she says. Rachel attributes her body being able to heal quicker because of 3D Training, the unique combination of infrared energy, heat and exercise in the HOTWORX saunas.

As her passion for HOTWORX grew, Rachel organically reached out to Stephen P. Smith, CEO & Creator of HOTWORX, via Instagram to express her love for her new obsession. “I could tell from our first conversation how passionate she is about the HOTWORX brand,” Steve explains.  Soon a partnership was formed between Rachel and HOTWORX, naming Bradshaw as this year’s brand ambassador. “It’s great to see how Rachel resonates with our members because of her story,” says Smith. “I’m so excited to take my love for HOTWORX to the next level,” states Bradshaw. “I go to the Denton, TX location all the time, and am always telling my friends about HOTWORX, even before I met Steve. To be able to partner in a more official manner and share my enthusiasm for HOTWORX on a larger scale is a dream come true! I hope we can introduce new members to HOTWORX so it can help others like it helped me.”

Along with her new record set to release in the Fall of 2021, Rachel and her family are featured on The Bradshaw Bunch, which was E!’s highest rated new series in four years! Season One showcased the heart-warming, yet comedic side of the Bradshaws, highlighting Rachel's return to releasing music. Her lead single, “Wild Horse,” received rave reviews and Editorial Playlisting ads from Apple Music & Spotify, and her second single, “Aphrodite,” was featured with an on-air performance in The Bradshaw Bunch’s Season One Finale.

Rachel will commence this year’s HOTWORX & Planet Beach franchise convention at La Cantera Resort & Spa in San Antonio, TX (July 19th) by singing the National Anthem. Additionally, Rachel will serve as a guest speaker at the convention in a Q&A style interview designed to understand the interests and characteristics of the company’s target demographic.

GET THE LATEST HOTWORX news ARTICLES SENT RIGHT TO YOUR INBOX!