HOTWORX Helps to Heal the Heroes 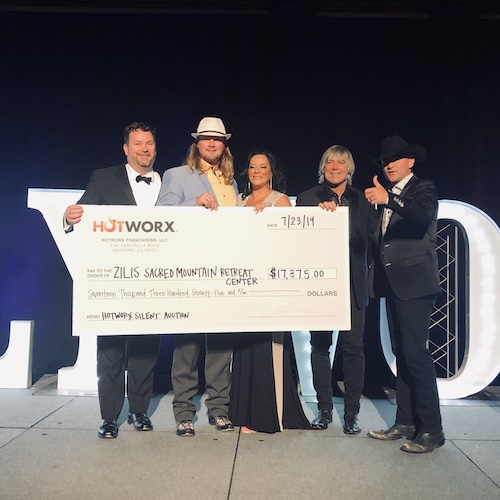 Earlier this year, HOTWORX announced a philanthropic partnership with Zilis Sacred Mountain Retreat Center (Z-SMRC), a non-profit center located near Deadwood in the Black Hills that brings our military, first responders, and their families to South Dakota for a time of respite and healing. To support their mission of creating avenues for forward movement with new and reinvigorated paths to healing and re-established positive life building endeavors, HOTWORX donated two of their patented infrared workout saunas. Special guests from the center in South Dakota attended our annual HOTWORX & Planet Beach franchise convention this July, where we hosted a Silent Auction event with the goal of raising at least $10,000 for this incredible cause!

We would like to express our sincere appreciation to the HOTWORX & Planet Beach franchisees and our vendors who donated and helped us exceed our goal by raising $17,375 for Z-SMRC!

Kasie Banks, Executive Marketing Director, recently traveled to Deadwood, South Dakota to represent HOTWORX at a "Healing the Heroes" Golf Tournament for Zilis Sacred Mountain Retreat Center. Many supporters participated in a 4 man scramble with at least 1 veteran, first responder, or Gold Star family member as a part of each team. While the event was primarily intended to be a fundraiser, friendships and memories were made that will last a lifetime.

After returning from the event, Banks shared the following: "I had the unexpected privilege of meeting two US veterans who have participated in a retreat at Z-SMRC and returned to mentor a new group of veterans and first responders during the retreat scheduled that would take place the week after the golf tournament. One of the mentors' face immediately lit up as I was introduced as a corporate employee for HOTWORX. I was overwhelmed with pride as she explained how much HOTWORX played a role in her personal recovery and I'm honored to know that our partnership with Z-SMRC plays even a small part in helping them heal our true heroes!"

Thank you to Jerrid Geving, the Geving Family, Emily Kruger, the Simon family, Louise Varner, Rob Winner, Kacey Weaver, and all those in attendance for welcoming HOTWORX into the Z-SMRC family!

GET THE LATEST HOTWORX news ARTICLES SENT RIGHT TO YOUR INBOX!